Siena is a city in Tuscany, Italy. It is the capital of the province of Siena.

The historic centre of Siena has been declared by UNESCO a World Heritage Site. It is one of the nation’s most visited tourist attractions, with over 163,000 international arrivals in 2008. Siena is famous for its cuisine, art, museums, medieval cityscape and the Palio, a horse race held twice a year. 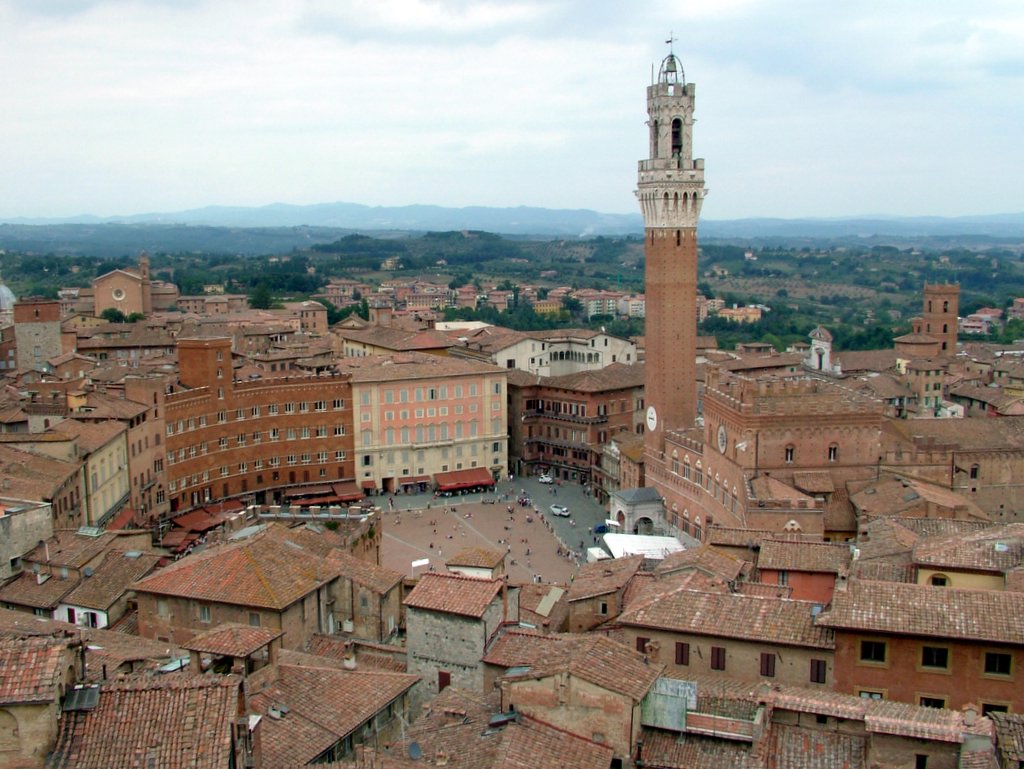 Siena, like other Tuscan hill towns, was first settled in the time of the Etruscans (c. 900–400 BC) when it was inhabited by a tribe called the Saina. The Etruscans were a tribe of advanced people who changed the face of central Italy through their use of irrigation to reclaim previously unfarmable land, and their custom of building their settlements in well-defended hill forts. A Roman town called Saena Julia was founded at the site in the time of the Emperor Augustus. Some archaeologists assert that Siena was controlled for a period by a Gaulish tribe called the Senones.[citation needed]

According to local legend, Siena was founded by Senius and Aschius, two sons of Remus and thus nephews of Romulus, after whom Rome was named. Supposedly after their father’s murder by Romulus, they fled Rome, taking with them the statue of the she-wolf suckling the infants (Capitoline Wolf), thus appropriating that symbol for the town.[citation needed] Additionally they rode white and black horses, giving rise to the Balzana, or coat of arms of Siena with a white band atop a dark band. Some claim the name Siena derives from Senius. Other etymologies derive the name from the Etruscan family name Saina, the Roman family name Saenii, or the Latin word senex “old” or its derived form seneo “to be old”.

Siena did not prosper under Roman rule. It was not sited near any major roads and lacked opportunities for trade. Its insular status meant that Christianity did not penetrate until the 4th century AD, and it was not until the Lombards invaded Siena and the surrounding territory that it knew prosperity.[citation needed] After the Lombard occupation, the old Roman roads of Via Aurelia and the Via Cassia passed through areas exposed to Byzantine raids, so the Lombards rerouted much of their trade between the Lombards’ northern possessions and Rome along a more secure road through Siena. Siena prospered as a trading post, and the constant streams of pilgrims passing to and from Rome provided a valuable source of income in the centuries to come.

The oldest aristocratic families in Siena date their line to the Lombards’ surrender in 774 to Charlemagne. At this point, the city was inundated with a swarm of Frankish overseers who married into the existing Sienese nobility and left a legacy that can be seen in the abbeys they founded throughout Sienese territory.[citation needed] Feudal power waned however, and by the death of Countess Matilda in 1115 the border territory of the March of Tuscany which had been under the control of her family, the Canossa, broke up into several autonomous regions. This ultimately resulted in the creation of the Republic of Siena.

The Republic existed for over four hundred years, from the late 11th century until the year 1555. During the golden age of Siena before the Black Death in 1348, the city was home to 50,000 people.

In the Italian War of 1551–59, the republic was defeated by the rival Duchy of Florence in alliance with the Spanish crown. After 18 months of resistance, Siena surrendered to Spain on 17 April 1555, marking the end of the republic.

The new Spanish King Felipe II, owing huge sums to the Medici, ceded it (apart from a series of coastal fortress annexed to the State of Presidi) to the Grand Duchy of Tuscany, to which it belonged until the unification of Italy in the 19th century.

A Republican government of 700 Sienese families in Montalcino resisted until 1559. 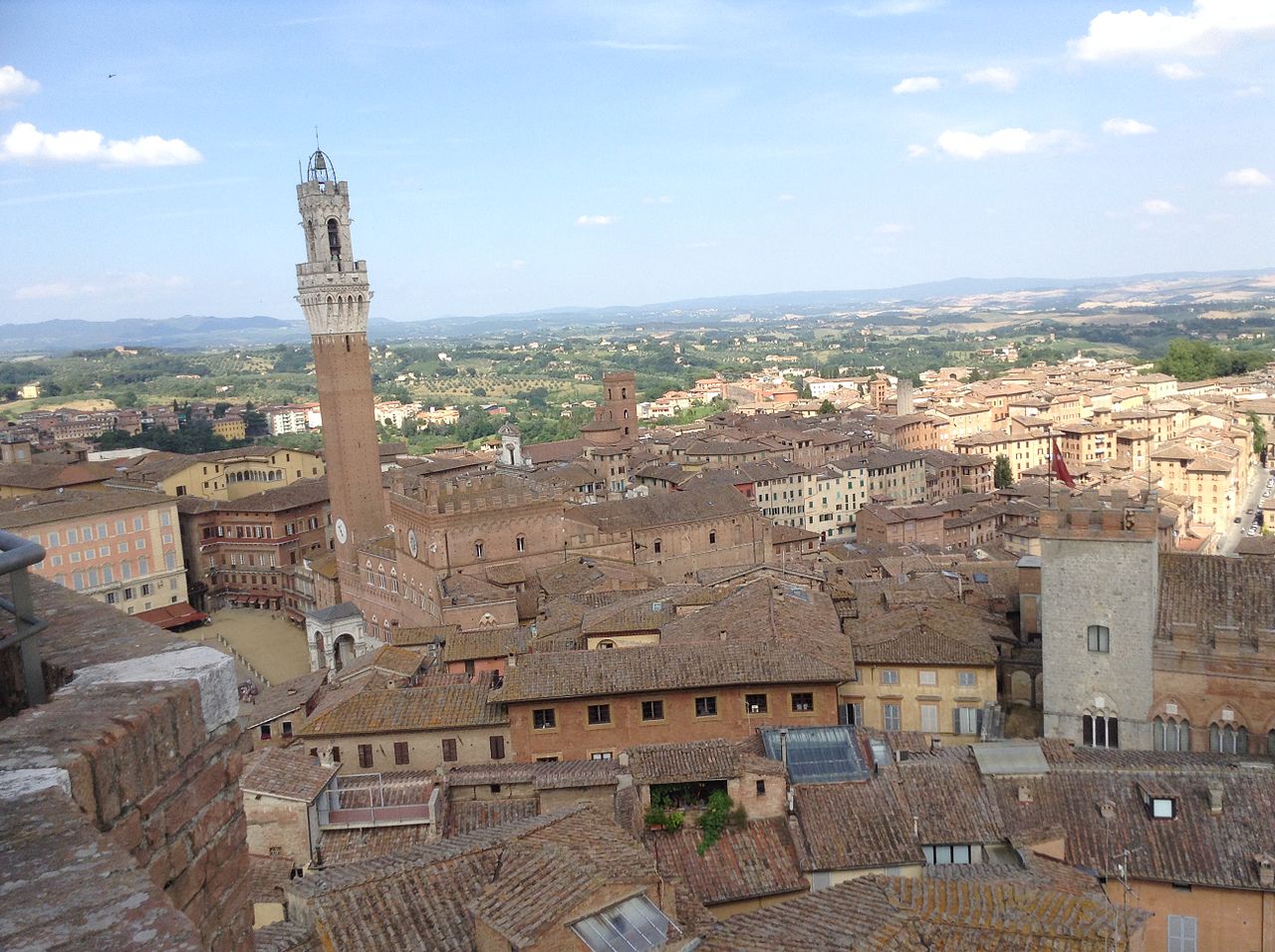 Geography
Siena is located in the central part of Tuscany, in the middle of a vast hilly landscape between the Arbia river valley (south), the Merse valley (south-west), the Elsa valley (north), the Chianti hills (north-east), the Montagnola Senese (west) and the Crete Senesi (south-east). The city lies at 322 m above sea level. 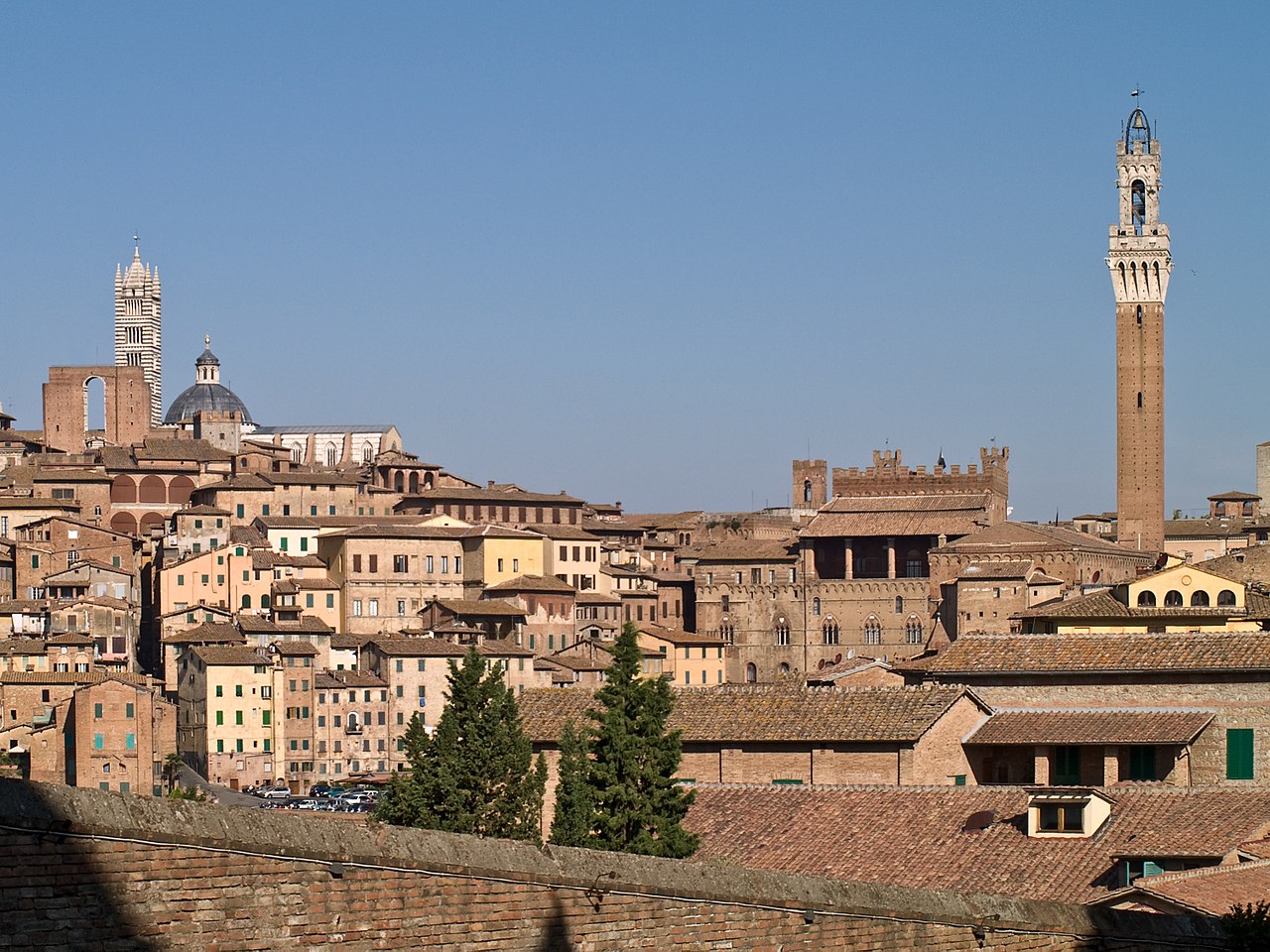 Climate
Siena has a typical inland Mediterranean climate. Average rainfall is 750 mm (29.5 in), with the maximum in November and the minimum in July. July is the hottest month, with an average temperature of 22.2 °C (72.0 °F), and January the coldest.